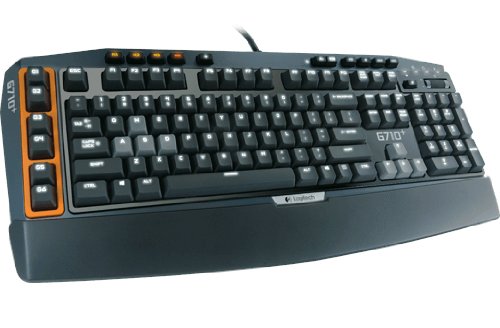 Logitech is certainly one of the most famous and popular manufacturer of input devices. It is well known for its popular gaming keyboards and gaming mice. Although Logitech has a very broad selection of different keyboard and mouse models, it currently only has two mechanical keyboards. The Logitech G710 Plus is one of them.

The Logitech G710 Plus is available with blue or brown Cherry MX switches. All keys have a clear white backlighting whose brightness is adjustable to one of four brightness levels. The WASD keys and the arrow keys have a separate color and their brightness level can be adjusted independently from the rest of the keyboard.

To prevent unintentional closing of your game, the Logitech G710 Plus comes with a “Game Mode Switch” which disables the windows key. For complex commands the keyboard has six programmable macro keys on the left side of the keyboard.

As we only have 10 fingers, its actually hard, to press more than 10 keys at once. But just for case, the Logitech G710 Plus comes with a 26-Key-Rollover.

To provide comfort, not only while gaming, but also in your daily routine, the Logitech G710 Plus is equipped with some more features. The USB Passthrough allows connecting an USB device directly to the keyboard, the removable palm rest takes care of your wrist and the multimedia keys simplify volume control and media playback.

"The Logitech G710+ has everything a good gaming keyboard requires and nothing extraneous."

"If you can get over the G710+'s cramped key layout, you'll find an exceptional mechanical gaming keyboard."

"It seems that Logitech has built a very solid foundation for peripherals over the years, and none of that was lost with them delving into a slightly new market with this mechanical gaming keyboard."

"The Logitech G710+ isn't perfect. Its odd styling is an immediate turn off, its USB pass-through is next to useless and ... However, overall it provides a pretty good balance of features, a great typing experience (ergonomic considerations notwithstanding) and ..."

"Despite it's position as a keyboard technology leader, this is the first mechanical switch board from Logitech's gaming-focused G-series range."

"Logitech's entry into mechanical keyboards is a pricey, backlit gaming model that looks and feels great, but it could deliver a bit more value for the money."

"The Logitech G710+ gaming mechanical keyboard is a solid gaming keyboard that offers some of the best features for gaming, but cheap construction makes the price feel excessive."