After finally deciding to go for a mechanical keyboard, another question usually comes up very soon: Which switch type do you want to use? The switches are probably one of the most important parts of the keyboard. Two keyboards from the same model, but with different switch types, can feel quite differently.

So, which switches are the best?
Sadly, there is no easy answer in general, it really depends on your preferences. But don’t worry, we will guide you through this. This article will tell you everything you need to know and will help you to make the right decision.

Based on their characteristics, there are basically three types of switches: Linear switches, tactile switches and clicky switches.

Linear switches are the simplest ones. They feel the same from the moment you start pressing the key until bottoming out. There is no tactile feedback or noise when hitting the actuation point (the point where the keypress gets registered – usually somewhere in the middle). So, most of the time, you will probably bottom out on each key press.

Tactile switches provide tactile feedback, when hitting the actuation point. As you press the key down, you will notice a small bump, which lets you know, that your key press got successfully registered.

Clicky switches provide an additional click sound, when hitting the actuation point. The main advantage of tactile and clicky switches is that you don’t have to push the key all the way down. You can release the key immediately after you receive the feedback.

The Cherry MX switches are named after their stem color. Different colors also mean different characteristics. So, when someone is talking about which color of MX Switches he prefers, he is not talking about aesthetics. Some manufacturers although, chose to link the switch color with the background color in some of their keyboards. But in general, that’s not the case.
The four most common Cherry MX switches are the following:

The Cherry MX Black is a linear switch, so it does not provide any feedback when hitting the actuation point and it just generates noise when bottoming out. With 60 cN, the actuation force is quite high. As you get no feedback about the actuation, you probably bottom out every key press. As a consequence, the likelihood of accidental presses might get reduced. On the other hand, it can be quite tiresome to traverse the entire switch at every key press.

As a result, the Cherry MX Black switches are mostly used by gamers, especially for RTS and shooter games. Typists usually choose other switch types.

Since August 2015, there is also a noise-damped version of the switch, the Cherry MX Black Silent. Since August 2015, there is also a noise-damped version of the switch, the Cherry MX Red Silent. The Cherry MX Blue is the favored switch type of most typing enthusiasts. The Cherry MX Blue provides tactile feedback and has a loud and clear click sound. These switches make sure, you recognize hitting the actuation point and therefore allow for really fast typing. It might take a bit of practice to stop pressing the key when hitting the actuation point, but once mastered, you surely will be writing texts like a professional secretary. In addition, hearing the click sound is really satisfying. Writing on a normal keyboard feels kind of boring, once you are used to a keyboard with Cherry MX Blue switches.

Even though the Cherry MX Blue switches are really good for typists, it doesn’t mean, that they are bad for gamers. There are actually a lot of gaming keyboards using them, but they have to compete with a lot of hybrid switches for their place.

One thing to keep in mind: Keyboards with Cherry MX Blue switches are usually quite loud, therefore the clicking sound can be annoying or distracting for co-workers or family members. The Cherry MX Brown is one of the most popular switch types right now. Probably because the switch represents quite a nice hybrid between gaming and typing. The switch provides a tactile feedback, but does not generate a sound like the Cherry MX Blue. The switch allows fast key presses in games, making them ideal for MOBAs, MMOs, RTS and similar genres.

Additional, they are often used in environments, where the Cherry MX Blue switches are too loud, but fast typing is desired. In 2019, Cherry refined the manufacturing process of the Cherry MX switches: A new surface for the stem made the switches more durable, so that Cherry now guarantees at least 100 million actuations (instead of 50 million) without any loss of quality. Probably more interesting than the increase of the already very long lifespan is the update of the contacts: Cherry optimized the bending radius to reduce the bounce time of the switches. All Cherry MX switches produced after November 1st, 2019 benefit from the updates.

Switches from other Manufacturers

The amount of companies, using switches from the Chinese manufacturer Kailh (Kaihua Electronics Co.) has significantly grown in the last few years. The technical specifications of the Kailh switches are the same as the ones of the respective Cherry MX switches. And although the company basically just copied the Cherry MX switches, it doesn’t necessarily mean that they are of a lower quality. The company has more than 25 years of experience in producing electronic switches.

Romer-G is a switch type introduced by Logitech with the Orion Spark G910. The switches are produced by the company itself in partnership with the Japanese electronics company Omron. The original Romer-G switches provide tactile feedback and are more quiet than most Cherry MX Switches. They were specially designed for gamers, the most similar Cherry MX switches are probably the Cherry MX Brown, although Romer-G actuates at a shorter distance and require less force. Later on, Logitech renamed the switches to Romer-G Tactile and introduced a second variant, the Romer-G Linear, that has no tactile feedback.

Besides the Romer-G switches, Logitech also produces switch types that correlate more to the classical Cherry MX switches. More specifically, there are GX Blue, GX Red and GX Brown, each mimicking the switch characteristics of the corresponding Cherry MX switch.

The SteelSeries OmniPoint is a really versatile switch: You can decide yourself, at what point the switch is going to actuate. The actuation distance can be set within the range of 0.4 mm and 3.6 mm for each key individually. This has been made possible by the use of magnetic sensors which measure the pressed distance at all times. The OmniPoint switches are linear switches, so their feeling is comparable to Cherry MX Reds. The first (and so far only) keyboard with OmniPoint switches is the SteelSeries Apex Pro.

The QS1 switch from SteelSeries is a linear switch with very short actuation distance. It is built for speed and targets gamers, who value fast reactions. They are manufactured by the Chinese electronics company Kailh. The most similar Cherry MX switch is the Cherry MX Red.

The second generation of switches from SteelSeries are produced in cooperation with Chinese manufacturer Gateron. The stem color defines the switch characteristics in the same way we know it from Cherry: Linear switches are red, tactile switches are brown and clicky switches are blue. The linear switches were introduced with the Apex 750, the other two variants made their first appearances in the Apex 7.

Low-Profile switches are particularly flat switches which are used to build thin mechanical keyboards. As a consequence of the smaller build size, the travel distances of low-profile switches are typically shorter than those of common switches.

Cherry has low-profile switches in their assortment since 2018. The MX Low Profile Red is a linear switch, actuating at 1.2 mm. They can be used for both typing and gaming. The linear MX Low Profile Speed has an even shorter actuation distance of 1 mm, we recommend them primarily for gaming.

GL switches refer to the low-profile series of Logitech, meaning that the height of these switches is only about half the height of a traditional switch. They were introduced with the Logitech G815 and Logitech G915. There are three kinds of GL switches distinguished by the type of feedback they provide: GL Clicky, GL Tactile und GL Linear. The actuation point is for all three types at 1.5 mm.

Optical switches, often also called opto-mechanical switches, are a recent innovation and might play an important role in the future of high-quality keyboards. In contrast to traditional mechanical switches that actuate by establishing a metal-to-metal contact, optical switches are triggered by a signal of light. Thus, less physical contact is required which makes the switches less susceptible to problems caused by physical degradation.

As the name already suggests, the Razer Clicky Optical Switch provides tactile and audible feedback. For the coloring, Razer has chosen purple. 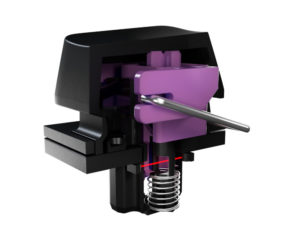 The linear option of Razer’s optical switches has only a very short actuation distance and requires for a key press a little less force than the Cherry MX Red does. Due to the very own characteristics of these switches, it’s a good idea to plan a little time to get used to them. 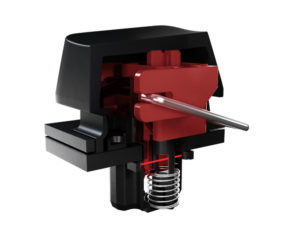 An analog switch with the ability to not only detect if a key is pressed but also measure how far it is pressed. It enables finer movement control in games, similar to a joystick. Moreover, it can be configured at which point the switch should actuate and it’s even possible to register two actions for different actuation points of a single key stroke. The first full keyboard using the Razer Analog Optical Switch was the Huntsman V2 Analog, released in February 2021. 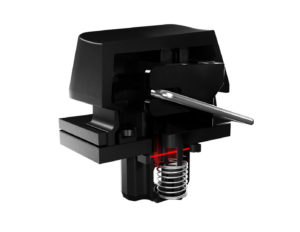