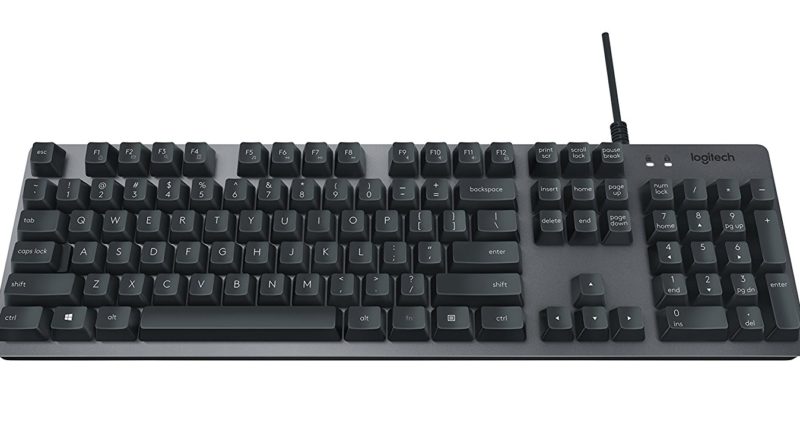 The Logitech K840 is the manufacturer’s first mechanical keyboard specifically designed for working rather than gaming. Presented in May 2017, is currently only available in North America and Asia.

Mechanical Keybord for the Workspace

The ludic look that accompanies many mechanical keyboards makes it hard to justify their use in the office. By contrast, the Logitech K840 has a sober design without any superfluous gadgets. Its key legend is simple and unobtrusive, making it perfectly suitable for everyday work.

The Logitech K840 also has three particularly striking advantages to traditional membrane keyboards: First, its mechanical switches provide for an elevated and steady typing experience. Second, 26 key rollover ensures that all inputs are transmitted successfully, even with extremely fast typers. Last but not least, the Logitech K840 holds all qualifications for a significantly longer service life. The built in Romer-G switches sustain more than 70 million keystrokes, which is approximately 14 times the lifespan of a conventional keyboard. When deciding on a keyboard that is in action for several hours every day workday, durability should be a major factor to be taken into consideration.

The Logitech K840 is a keyboard designed for productive work, without any unnecessary gimmicks. It can be deployed both in the office and at home. Multimedia controls are integrated in the function keys, and for occasional gaming the keyboard even provides an opportunity for deactivating the Windows key. On the downside, users of the Logitech K840 have to make do without any background lighting. While this should not be a problem in the office, night owls might consider it a knock-out criterion. In that case, it might be worth to cast an eye on the Logitech G610: this somber looking, rather inexpensive mechanical keyboard comes equipped with white background lighting.

There are no reviews yet.