Roccat‘s keyboard naming has caused quite some confusion, so let us start right off with an explanation of the different versions. The three keyboards do not only look very similar, they are actually completely the same, the only difference is the color of plate, keycaps and wrist rest. The Vulcan 120 is silver, the Vulcan 121 is black and the Vulcan 122 is white. All three keyboards are built with tactile switches. Additionally, the Vulcan 121 is the only one also available with linear switches. Differences between the switch types are explained in the overview of mechanical keyboard switches.

If you want linear switches, you obviously have to take the Vulcan 121. If you want tactile switches, you can simply choose the color you like most. As said before, there are no technical differences between the three keyboards. By the way, the Roccat Vulcan 100 is also identical to the Vulcan 120, it just comes without a wrist rest.

Gaming Keyboard with many Features

The Vulcan 120 / 121 / 122 is oriented towards gaming. Thanks to n-key rollover, it is able to detect arbitrary many keypresses at once. The keyboard features a gaming mode that disables the windows key and caps lock. The keyboard’s RGB illumination is paired with Roccat’s AIMO system which enables synchronization of multiple devices and dynamic lighting effects. Illumination can be controlled comfortably via software or with help of the dedicated media wheel. Furthermore, a synthetic wrist rest is included, it is attached / detached via magnet. 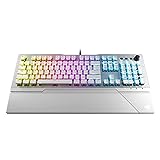 "With a striking white build that also caters to RGB, the Vulcan 122 Aimo will brighten up any gamer’s setup. Tactile Roccat switches are good for typing, but the distance between the keys and the high price are drawbacks."

"The Roccat Vulcan 121 Aimo has the same design, features and price as its predecessor — and that's good."

"The Roccat Vulcan 122 AIMO is a gorgeous piece of gaming kit. It's got the aesthetics, the comfort and a unique design. It's expensive, but it's worth it."

"Just as we expected, the ROCCAT Vulcan 120 AIMO turned out to be a pretty great keyboard. We were a bit apprehensive about the new Titan switches, but they work and feel great in both standard typing and gaming use cases. "

"Roccat have pulled out all the stops with the Vulcan 120. The overall aesthetic oozes premium quality and we finally see AIMO in per-key glory. Their new Titan switches are immensely comfortable and consistent, the gaming features like Profiles, Macros, Remapping, Game Mode and Easy-Switch[+] cover all the bases. There is a lot to love about this keyboard."

"Roccat's Vulcan 120 Aimo finally does right by Cherry-style RGB switches, with half-height keycaps exposing the translucent chassis underneath and giving the keyboard a vibrant, eye-catching look. There are still some improvements to be made though."

"ROCCAT’s first attempt at a mechanical keyswitch has proved largely successful, which paired with the exclusive styling, makes this a very tempting purchase."

"With custom Roccat key switches, elaborate RGB lighting, and a kitchen-sink feature set, the Vulcan 120 AIMO mechanical gaming keyboard is well worth the price of admission."

"Roccat’s Titan Tactile switches are an absolute joy to type on. Every key press cements itself down into place firmly, with only the subtlest of clicks behind it."

"The Vulcan 120 Aimo is a positive step for Roccat. With good build quality, satisfying and exclusive switches, and software that strikes a great balance between usability and complexity, it ticks the boxes that a premium keyboard should. The price tag is certainly high, but it isn’t out of line with the competition."

"The Roccat Vulcan 120 Aimo is one of the best gaming keyboard we’ve ever used. It’s a joy to game and type on, and it has a stunning design that proves that gaming peripherals can be stylish as well."