The Corsair K95 RGB Platinum is a new flagship keyboard model from Corsair, introduced in January 2017. The naming might suggest, that the keyboard is simply a revised Corsair K95 RGB. But that’s not the case, there are quite some notable changes…

As its predecessor, the K95 RGB Platinum is a mechanical gaming keyboard with Cherry MX switches. You can choose between Cherry MX Brown and Cherry MX Speed. The brown, tactile switches are a good all-round option for all those who play a lot of games but also need their computer for working or typing. The linear MX Speed switches on the other hand, are more suited for competitive gamers. They especially shine, when every millisecond counts, as they are up to 40 percent faster than other switches.

The K95 RGB Platinum is overall ideally suited for gaming. It offers full n-key rollover and 100% anti-ghosting. The convenient windows key lock makes sure, that you won’t minimize your game by accident. And last but not least, the included palm rest makes even longer gaming sessions quite enjoyable.

Furthermore, the keyboard’s RGB illumination creates a unique gaming experience with its impressive effects. There are multiple illumination modes, various effects and endless possibilities to individually adjust the lighting. As usual, you can configure the lighting via the Corsair Utility Engine. But the Corsair K95 RGB Platinum also introduces a new possibility to save illumination profiles. Is comes with 8 MB internal memory, so you can also save your configuration directly on the keyboard. The same goes for the configuration of the macro keys.

When put side on side, you will immediately notice some differences between the K95 RGB and the K95 RGB Platinum. The most eye-catching one, is probably the different amount of dedicated macro keys. The K95 RGB has 18 macro keys and the K95 RGB Platinum has only six. But not only the layout, but also the design of the keyboard changed. A new bigger font is used, it looks a bit similar to the one of the Razer BlackWidow Chroma. Furthermore, the looks and placement of the media controls were altered.

A frequent criticism of the K70 RGB and the K95 RBG has been the missing USB passthrough. It’s usually not a deal breaker, but something one might expect for that amount of money. With the K95 RGB Platinum, these discussions belong to the past, as the manufacturer finally added a USB passthrough. You now can easily connect your mouse, headset or USB stick to your keyboard. 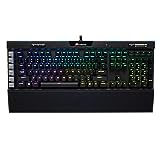 "Being a flagship product in any Corsair line means you have a lot to live up to and the K95 RGB Platinum really does. It has everything any gamer across all different gaming types would like and some pretty badass lighting to match. This is definitely one of the better keyboards I’ve reviewed all year. "

"Corsair's K95 Platinum is as good as it gets in the keyboard world."

"The K95 RGB Platinum is a beautiful keyboard with excellent switches, top-tier lighting, and one of the biggest footprints you'll ever find. And it's still smaller than the old K90!"

"Well made, full-featured, a joy to use"

"One of the best gaming keyboards around, but it’s very expensive."

"While it may not be for everyone due to its high price, the Corsair K95 RGB Platinum is seriously good and packed with tons of features."

"The K95 RGB PLATINUM isn't just a mechanical gaming keyboard, but a reminder of how beautiful the interaction between man and machine can be."

"The Platinum version of the iconic K95 mechanical gaming keyboard makes a great thing better and adds snazzy edge lighting, though some gamers will bemoan its reduced array of macro keys."

"Corsair's newest gaming keyboard is the K95 RGB Platinum Mechanical and it also happens to be the best keyboard Corsair has ever created."

"The Corsair K95 RGB Platinum is a stunner with the most RGB lighting ever, redesigned keys, convenient shortcuts, a comfy wrist rest and an equally high price to match its high-end features."

"Corsair bills the K95 RGB Platinum as its ultimate mechanical gaming keyboard, and it's easy to see why. There's very little it doesn't have."