The Mad Catz S.T.R.I.K.E. Series is well known among most gamers. Their keyboards usually offer a lot of utility and performance, but also have quite a high price. The Mad Catz Strike TE (Tournament Edition) is the first mechanical keyboard from the manufacturer and quite low priced compared to the other keyboards of the series. Is uses brown mechanical switches from the Chinese manufacturer Kailh.

The keyboard provides a 30-key rollover as anti-ghosting measure and is therefore perfectly prepared for all kind of games. It offers 12 macro keys which can be used in three different modes. So overall 36 user-defined commands can be executed.
There are no dedicated media keys, but the keys F5 to F12 also operate as build-in shortcut keys to control multimedia or the brightness of the illumination.

The Mad Catz Strike TE has white backlighting, its brightness can be individually adjusted for single keys or key areas like WASD.
To round up the gaming package, the windows key can be disabled by a sliding switch.

The Mad Catz Strike TE is available in 4 different colors: white, red, matte black and gloss black. The only difference between these models is their appearance. So, no matter which color you choose, you will get brown kailh switches anyway.
Also included with every model: a removable wrist rest matching the color of the keyboard. 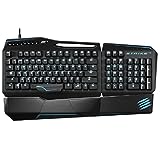 "They keys are of course critical to the success of a gaming board. Mad Catz go with Kailh brown switches here, parts with 50m stroke lifespan. At first when we began using the keyboard, ..."

"The S.T.R.I.K.E. TE is the first mechanical gaming keyboard from Mad Catz, and it's a big improvement over the company's previous keyboards, but there are still a couple of features that fall flat."

Advantages and Disadvantages of Mechanical Keyboards