The two keyboards Logitech G713 and Logitech G715 were revealed in July 2022 while presenting Logitech’s Aurora collection. This collection features a playful design and has the goal to address the needs and wants of women gamers while appealing to all gamers. Other parts of the collection include a headset, microphone, carry bag and gaming mouse.

The Logitech G715 is a wireless mechanical keyboard for gaming and everyday needs. It brings connectivity via Lightspeed (2.4 GHz Wireless) and Bluetooth. It includes a battery which is supposed to last about 25 hours with one charge. The keyboard features Logitech GX switches, buyers can choose between GX Blue, GX Brown and GX Red.

Most keyboards on the market are usually black or some sort of or grayish. So it is always nice to see when a company increases the variety and brings out its own design ideas. The Logitech G713 and G715 are both white, but Logitech also offers cases and key caps in green and pink.

Due to the tenkeyless form factor, the keyboards occupy only little space on your desk, but you will have to do without a numpad. To ease every day’s use though, the keyboards feature convenient media controls including a volume wheel. Moreover, a cozy wrist wrest in shape of a cloud is also included.

The Logitech G713 is essentially equal to the G715, they only differ regarding available connection modes. The G713 does not offer any wireless capabilities, it therefore always has to be connected via USB cable. In exchange, the Logitech G713 is a bit cheaper than the G715. 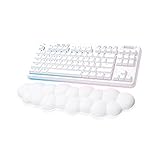 "The Logitech G715 takes an unconventional approach in the world of gaming keyboards, with its pastel visual language and robust TKL ethos as the flagship of the Aurora Collection. If you’re in the market for a keyboard that’s a little less aggressively styled yet still retains full mechanical function, then this model could be for you."

"The Logitech G715 is a refreshing cozy addition to the world of boring gaming aesthetics. Unfortunately, there’s absolutely nothing charming about the price you’ll have to pay for this luxury."

"Logitech's G715 made a swing and a miss at the enthusiast keyboard market, and despite pulling out all the stops it still doesn't seem to add up, especially with the added cost of the expectedly free colourful accessories."

"Logitech’s G715 TKL wireless gaming keyboard is pretty, well-built, and great for typing, but is it worth $200?"