The Logitech G815 is a mechanical gaming keyboard introduced in August 2019. Together with the wireless Logitech G915, the keyboard makes the debut of Logitech’s low-profile GL switches.

Three different kinds of switches are available for Logitech G815: GL Tactile, GL Clicky and GL Linear. GL Tactile provide a small tactile bump, GL Clicky have a tactile and audible feedback and GL Linear are simply linear switches with smooth key stroke. All three types are so called low-profile switches, their height is only about half of the height of a traditional switch. Thus, the keyboard is overall very thin with a total height of only 22 mm.

Even though the Logitech G815 is thin, it is not really a compact keyboard – the many special keys need quite some space: on the left, there are five configurable macro keys (G1-G5) and above the function keys are some controls for switching profiles, managing illumination and activating / deactivating the gaming mode. Moreover, the keyboard features dedicated multimedia controls with an edgeless volume wheel. A convenient USB passthrough allows to connect an arbitrary USB device directly at the keyboard. The Logitech G815 has no wrist rest, but you could argue that due to its low-profile design, a wrist rest isn’t needed anyway.

The keyboard features full RGB illumination, in other words, every single key can be lit in one of about 16.8 million colors. Brightness, coloring and animations are configured via Logitech G Hub software and can easily be adapted on the fly by making use of the dedicated function key. Lightsync RGB technology enables to synchronize the lighting of the keyboard with the lighting of other compatible devices (e.g. speakers from Logitech).

Comparison of tactile vs linear vs clicky

When buying the keyboard, you need to decide for one of the three available switch types. If you prefer the traditional feel and click from mechanical switches, then GL Clicky is the clear choice. If the acoustic level is an important factor and you want to have a silent mechanical keyboard, then you can take either GL Tactile or GL Linear. The decision between the tactile and the linear switches depends mostly on personal preference, but since the tactile feedback is not so strong, the difference between those two variants is actually not that big.

The Logitech G915 is a wireless keyboard that effectively looks the same as Logitech G815 and also offers almost identical features. The main difference is their mode of connection (wireless vs USB cable) and subsequent changes. The G915 has a battery as it is required for wireless operation and the USB passthrough is naturally only available for the G815. Last but not least, there are differences in pricing – at the time of publication, the G815 has a suggested retail price of $199.99 while the G915 has a suggested retail price of $249.99. 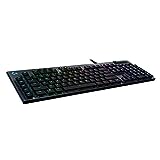 "The Logitech G815 Lightsync RGB is a premium wired mechanical gaming keyboard with a price tag to match. But with a low-profile design combined with the excellent GL Switches, you won’t be disappointed with this peripheral purchase."