The Logitech G915 is a wireless mechanical gaming keyboard which is available since August 2019. Its design and main features are essentially identical to those of the Logitech G815, the two keyboards primarily differ in their mode of connection (wireless vs USB).

The G915 is usually connected via the included Lightspeed receiver which needs to be plugged into a USB port. This way, a high signal rate is established. Alternatively, the keyboard can also use Bluetooth which is a bit slower though. Since the method of connection can be changed by simply pressing the according button, the Logitech G915 is ideally suited to be used by more than one device. The keyboard features full RGB illumination, every key can individually be illuminated by one of about 16.8 million colors. As one would expect, there are of course various effects and animations available. The illumination can be synchronized with other devices that support Logitech’s Lightsync. In contrast to the G613, there are no more AA batteries required, the Logitech G915 comes with an integrated battery. According to Logitech, this battery is supposed to last about 30 hours of gaming with maximal brightness or up to 135 days each with 8 hours of usage (overall more than 1000 hours) when the illumination is disabled.

The Logitech G915 is not only a wireless mechanical keyboard, it is also packed with lots of features. The gaming mode makes it easy to enable/disable the windows key (and any further requested keys) and ensures a worry-free gaming experience. The Logitech G Hub software is used to configure possibly multiple lighting profiles and program the five macro keys (G1-G5). Furthermore, the keyboard offers dedicated media controls including an edgeless volume wheel.

Many Choices: Clicky vs. Tactile vs. Linear

Logitech’s new GL switches have their premiere with the Logitech G915, along with the G815 which has been introduced at the same time. The Logitech GL switches are low-profile switches that are about only half the height of a traditional switch. Thus, they make a very thin overall construction possible, resulting in a total height of the keyboard of only 22 millimeters. Three kinds of GL switches are available: GL Clicky refers to switches with traditional click sound and tactile bump. GL Tactile only provide tactile but no audible feedback. And last but not least, GL Linear offer a smooth key stroke without any audible or tactile feedback. There is no general recommendation for which switch to choose, it’s mostly a matter of personal preference.

A tenkeyless variant of the keyboard is available since June 2020. The so-called Logitech G915 TKL drops the numpad and the macro keys from the standard version to obtain a smaller size. With its length of 368 mm (15.2 in) it requires only little space on the desk and is easy to transport. The compact keyboard is equipped with a new battery which is supposed to provide up to 40 hours of gaming (with the illumination set to full brightness) with a single charge. Apart from these differences, the two keyboards are almost identical: both the G915 and G915 TKL feature dedicated media controls, RGB illumination, wireless Lightspeed connection and Logitech GL switches of your choice. 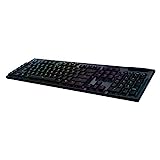 "The Logitech G915 TKL is an expensive gaming keyboard, but it easily earns its price."

"Get wireless gaming performance to rival that of wired ones with the Logitech G915 TKL Lightspeed. This stunner is compact, long-lasting, and customizable – not to mention, amazing to use whether you’re gaming or working. Is its price too much to pay for a cable-free experience? We don’t think so."

"I've tried out a lot of keyboards in my day, but I have a new favorite. The Logitech G915 Lightspeed isn't just your average gaming keyboard. Its combination of low-profile mechanical keys, a lack of wires, and solid construction make it the best keyboard you can get your hands on."

"The Logitech G915 TKL takes our favorite wireless gaming keyboard and makes it cheaper and smaller. With a slim but sturdy, portable frame and the option to easily switch from PC to PC and snappy low-price switches, it’s the premium wireless tenkeyless for mechanical enthusiasts who can afford it."

"The Logitech G915 TKL is an excellent keyboard with great specs and it’s also very comfortable to use. It’s high price means this won’t be for everybody, but if you can afford it and want a low-profile board, this is a great option."

"The Logitech G915 TKL is one of the best tenkeyless gaming keyboards I’ve ever used, but it’s also one of the most expensive."

"A brilliantly devised, happy medium between quick and comfortable gaming performance and stable typing, with grown-up looks and all the gaming features you'd want."

"You're really going to have to squint to look past the price of the Logitech G915 TKL, but if you can manage that feat you'll be greeted with a superb wireless, low-profile gaming keyboard."

"Swift and stylish, the Logitech G915 Lightspeed has it all - it sets a new benchmark in gaming keyboards. Only its super-steep price keeps it from snagging an Editors' Choice."

"There's no doubt that the Logitech G915 offers a brilliant wireless experience with some great switches. They've built a sturdy product that ushers in a new era for Logitech. That said, I'd recommend the G915 in a heartbeat if it wasn't for one thing - its price."

"Pick up the Logitech G915 if you want a top-of-the-line wireless gaming keyboard with no compromises. However, avoid it if you can't stomach the $250 price tag."

"The Logitech G915 is the best low-profile mechanical keyboard I’ve used yet. It is feature rich, offers great battery life even with full RGB lighting, and its new switches will quickly win over doubters. For $249 I wish it was more programmable and included a wrist rest, but it’s a great entry from Logitech nonetheless."