The Razer Huntsman V2 is an opto-mechanical gaming keyboard with rich feature set.

A Short History of the Razer Huntsman Series

Razer started to use optical switches back in June 2018 and immediately had big success with it: The Razer Huntsman became one of the most sold gaming keyboards worldwide. Later in 2018, the Huntsman Elite followed. A tenkeyless version was then released in 2019, the 60% version Huntsman Mini followed in 2020. With the Razer Huntsman V2 Analog, the first keyboard of the second generation was announced in February 2021. The switches of the keyboard are not only optical but also analog. The analog inputs enabled advanced control in games that usually only joysticks have to offer. In September 2021, Razer finally announced the Huntsman V2 (without analog switches) and its tenkeyless version.

Just like all other Huntsman keyboards, the Razer Huntsman V2 features opto-mechanical switches. This means that the switches are actuated by a beam of light instead of establishing a metal contact. The keyboard though can only tell if a key is pressed or not, unlike the Huntsman V2 Analog which can also tell how far a key is pressed down. Thus, the “normal” Huntsman V2 does not support analog input.

Razer reworked their optical switches for the Huntsman V2: Silicon sound dampener were added to reduce the noise. Furthermore, additional lubing was performed in order to ensure that operation is as smooth as possible. The keyboard is available with either linear switches (“red”) or clicky switches (“purple”).

No more underglow, but still crammed with features

Overall, the Huntsman V2 looks very similar to the Huntsman Elite or the Huntsman V2 Analog. One difference is that there is no more underglow. But don’t worry, the keyboard can still put up an amazing RGB lighting show. As usual, Razer Synapse is there to configure lighting effects and handle in-game-integration. Also the digital dial, four dedicated media keys, on-board memory, a game mode, n-key rollover and a leatherette wrist rest made it into the Huntsman V2. Moreover, it’s really good to see that the keyboard comes with double-shot PBT keycaps – those are more resistant to wear than common ABS keycaps.

The smaller versions of the keyboard without numpad is called Razer Huntsman V2 TKL. This tenkeyless version also lacks the digital dial and has no dedicated media keys. But apart from that, the feature sets are basically the same. Just like the bigger Huntsman V2, the TKL version is also available with either linear or clicky switches. 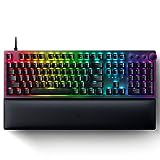 "The Razer Huntsman V2 combines innovative optical switches with quieter keycaps and gorgeous RGB lighting for a mild upgrade over its predecessor."

"The new design brings a wealth of improved features and holds off on unnecessary frills to keep the price reasonable, and the noise at a minimum."

"The Razer Huntsman V2 optical gaming keyboard is a joy to type and game on, while also offering a quieter mechanical experience for anyone who will use it around those less appreciative of the clickity-clacks standard to mechanical models. And though it does feature an 8,000 Hz polling rate, this feature isn't as relevant on a keyboard as it is on a mouse, and the price might put the Huntsman V2 out of reach."

"The Razer Huntsman V2 is an expensive gaming keyboard but delivers with premium features, like programmable keys that can store up to two functions, robust media keys and premium keycaps atop admirable optical mechanical switches. But most won’t notice the 8,000 Hz polling rate, and there are no macro keys."

"Razer's Huntsman V2 TKL is a gaming keyboard that will win you over with its smooth switches."

"The Razer Huntsman V2 is fast and packed to the brim with features but falls flat on acoustics."

"Razer's range-topping keyboard gets even better with the newest switches, insane performance and sound dampening foam that leaves the feel the same but makes the Huntsman V2 a keyboard you can also take to the office."